The Amazon is the planet’s largest rainforest and the most iconic one. Its rich and diverse biome, as well as its fragility, has turned it into the highlight of environmentalist efforts. The Amazon rainforest biome holds great importance for our planet’s health. That's just one of the reasons we should protect it.

What exactly makes this immense rainforest so unique and valuable? Let’s see what is the Amazon rainforest like and how living there is for the plants, animals and humans alike.

How Large Is the Amazon Rainforest?

The Amazon forest is the largest one in the world. It’s crossed by thousands of rivers, including the second largest one on the planet: the mighty Amazon. To get an idea of how big Amazon’s basin and its rainforest are, you should know that it covers a surface equal to the lower 48 United States: 2.3 million square miles (which is about 6 million square kilometers).

Here are some more astonishing facts about the Amazon rainforest:

According to images via satellite used in a 2018 data collection study by Hansen et al., almost two thirds (60%) of the Amazonian basin lies in Brazil, followed by Peru (12%), Colombia (8%), Bolivia (7%) and the other 5 countries.

How Many Species Does the Amazon Rainforest Contain? 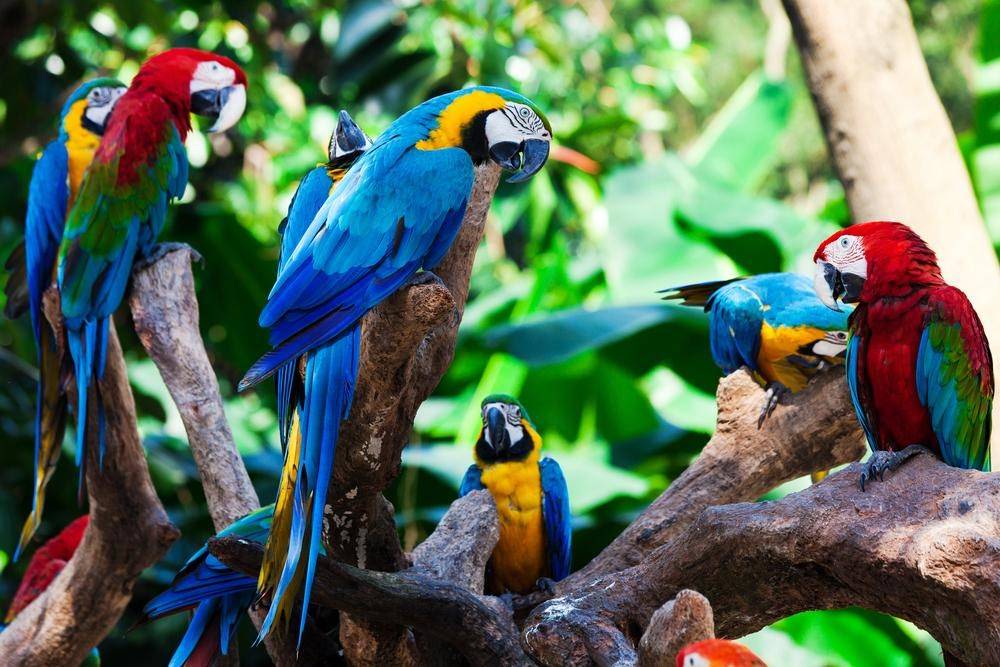 What makes the Amazon rainforest unique is the fact that it sustains an incredibly diverse ecosystem. It's home to about 10% of all known flora and fauna species in the world.

Here’s a breakdown of the species it contains, by class:

There are also countless species that are very useful to humans, such as the rubber tree, the Brazilian nut tree, mahogany trees, freshwater fish that’s suitable for consumption, medicinal plants, and so on.

Amongst the numerous benefits provided to humans by the Amazon rainforest, one, in particular, has a major effect on our lives. The Amazonian forests are “the lungs of the Earth.” They keep our planet cool, counteracting the global warming effects that threaten to throw numerous ecosystems out of balance.

Besides sheltering so many animals and plants, the Amazon basin is also home to more than 30 million people. Amongst them are 400 to 500 indigenous tribes, 50 of them being completely out of contact with the outside world.

Most of these people have a history that is strongly connected to the environment in the Amazon rainforest. Throughout their history, they have used the rivers to fish, travel and transport goods. They have been using the forest for all of their needs.

The tribes that have been living alongside the Amazon for millennia have actually changed the face of the Amazonian rainforest by managing it in a sustainable way. The huge difference that was brought by exploitations during the past half a century is caused by modern methods of logging, agriculture, mining, or poaching.

This is why environmentalists work with indigenous tribes to bring back traditional ways of exploiting the forest. These methods are less invasive and carry a deeper understanding and respect for the biodiversity and regeneration power of the forest. For example, rubber harvesters called “tappers” have been working with NGOs to preserve non-invasive techniques and to distribute natural rubbers to ethical companies.

Living in the Amazon rainforest takes decades and centuries of practices passed on from one generation to another, and a great understanding of how humans can thrive without destroying their home. Although a lot of the indigenous people from the Amazonian basin are now using Western clothes and technology, they are still crucial for the preservation efforts in the area.

Their knowledge of the forest and how they preserve the balance between human activity and wilderness should be used as an inspiration in modern times as well.

The sheer number of species that live in the Amazonian basin is one of the most amazing features of the Amazon rainforest. One in ten known species lives there.

With such unmatched biodiversity, the Amazon rainforest is considered as one of the most exotic and rewarding destinations for both professionals and tourists. But this great variety of species comes at a cost. The populations of many species are not very large, and many of them end up on the list of endangered or threatened species.

The reason why we should protect this incredible biome is that each of the endemic species of the Amazon basin has the potential of generating global human benefits, from developing ground-breaking medicine to discovering sustainable sources of food or fuel. Protecting the Amazon rainforest truly means taking care of our future as a species.

By answering this question, we can better explain why this biome is so important to people all around the world.

We went through the Amazon rainforest characteristics and offered a clearer picture of how unique this vast region is. Our goal is to find more people willing to contribute to its conservation.

One of the ways you can help the Amazon rainforest is to contribute to programs that support sustainable agriculture, tourism, and industry.

Plant a tree today by donating to a forestation program or by spreading awareness about such programs. Be a part of the solution and take action today, for the future generations and our planet’s health.