Rainforests are a shelter for millions of animal and plant species, making this incredible biome one of the richest in the world. According to The Nature Conservancy, rainforests only occupy about 2% of the total surface of our planet but are home to half of Earth's plants and animals.

The trees in the rainforest are what defines this rich and unique ecosystem. Rainforests are tall, dense forests with high levels of annual precipitations.

Rainforests are often called "the lungs of the planet" because of the role they play in storing carbon dioxide from the atmosphere and producing oxygen. Because the role they play in maintaining the world healthy is so significant, it's important to learn as much as possible about the rainforest.

In this article, we will look at the types of rainforest trees and how they make this ecosystem so unique.

Tropical rainforest trees have some unique characteristics that allow them to grow and adapt in a hot, humid and very wet climate.

With these facts in mind, let’s take a closer look at some of the trees in the Amazon rainforest and learn what makes them so unique. 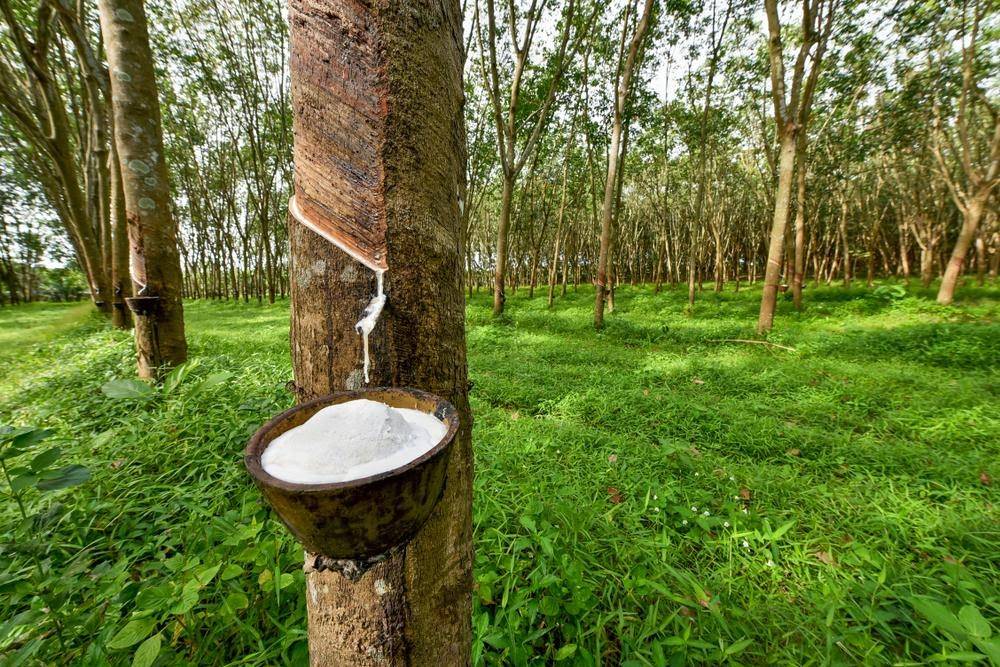 One of the native Amazon tree species is the rubber tree (Hevea brasiliensis) It's a type of tree that produces latex from which natural rubber is made.

It was first in the 19th century to produce pencil erasers. Since then, we've found other uses for natural rubber and its export volume has increased.

The biggest consumers of natural rubber in the Western world were automobile tires producers, and manufacturers of rubber gloves, toy balloons, and industrial adhesive. The increasing demand for rubber products led scientists to invent the first synthetic rubber at the beginning of the 20th century.

Nowadays, natural rubber is used significantly less but is still preferred for certain products, such as textiles, shoes or toys. The key aspect of the natural rubber industry is that it can be harvested without harming the tree.

Non-governmental organizations that focus on preserving the rainforest have been taking actions to promote “wild rubber” production. This measure offers a sustainable means of living to native people, encouraging the respectful use of rainforest materials and resources.

Let’s explore some more Amazon tree species that fascinate us. Here is a list of less common trees in the Amazon rainforest that we love:

Unfortunately, the exposure to unsustainable industries - mining, logging, building dams, and even tourism - has led to many rainforest species to end up on the endangered list. Most of us tend to think of animals when we hear about endangered species, but countless species of plants have gained this status in the last decades.

Some of the Amazonian trees that ended up on the list include::

According to a huge international study by 160 scientists gathered by the Amazon Tree Diversity Network, one in two tree species could disappear due to deforestation in the Amazon. This worrisome conclusion is one of the many factors that make the protection of the Amazon rainforest crucial for our planet.

What Makes Rainforests Such Important Ecosystems for the World’s Environment?

It's crucial for the entire world to understand why it should contribute, directly or indirectly, to the reforestation and protection of these incredible forests.

The level of humidity generated by a rainforest through the process of transpiration is so high that it influences the planet’s climate. Losing large numbers of trees in tropical rainforests due to irresponsible and illegal deforestation may drive the global temperature over its tipping point. These activities could also threaten endemic species and deplete the area of natural resources. As indigenous people are forced out of their land and the population is getting poorer, mass migration could affect the world economy.

The entire world exists in a fragile equilibrium. If something goes off-balance in one part of the world, the effects could reverberate tens of thousands of miles away. The same is true for the Amazon rainforest. That's why protecting it isn't only the responsibility of the local governments. We can do something about it too.

If you agree that the rainforest is one of the most important biomes we have on the planet, you can directly contribute to its protection and regeneration by donating to an organization that directly supports reforestation and local farmers.

Plant a tree today and become part of the solution, not the problem.