Most people know what defines a rainforest: a forest characterized by abundant rainfall, tall trees, and lush vegetation. Very few know that the rainforest is also divided into five different parts:

While all these layers have some amazing characteristics, the canopy in itself is truly fascinating. For starters, it houses some of the most diverse community of animals in the area, from insects to birds or even monkeys. The rainforest canopy is essential to the local ecosystem. As you start diving into what makes it so unique you can understand the true role it plays.

Significance of the Rainforest Canopy in Ecological Processes

So, what is the canopy layer? If you fly over the Amazon Rainforest, all you’ll see is a vast land filled with green. What you’ll actually look at is the Amazon Rainforest canopy made up of the tree crowns that seem to be overlapping with each other. In reality, the canopy trees barely even touch, but it’s so dense that it’s easy to get that impression.

Here are some interesting Amazon Rainforest canopy facts that prove its significance in the ecological process:

Background Information on the Rainforest

You can find rainforests all over the globe, except for Antarctica. These natural elements are essential to the planet because they can absorb CO2 from the air and store it, leaving less carbon in the atmosphere. One estimate claims that the Amazon Rainforest absorbs around 600 million tons of CO2 per year. This is really unsurprising, considering the Amazon is the largest rainforest in the entire world, even larger than the Congo Basin and Indonesia Rainforest combined.

Here, in the Amazon, you can find roughly 16,000 tree species and 390 billion individual trees. It's an ecosystem booming with life, unlike almost any other place on earth:

All this life here is protected mostly thanks to the canopy. Like with all rainforests, the canopy can act as a protective layer between the sky and the ground. In the case of the Amazon Rainforest, its canopy has some unique features you should know.

Unique Features of the Rainforest Canopy 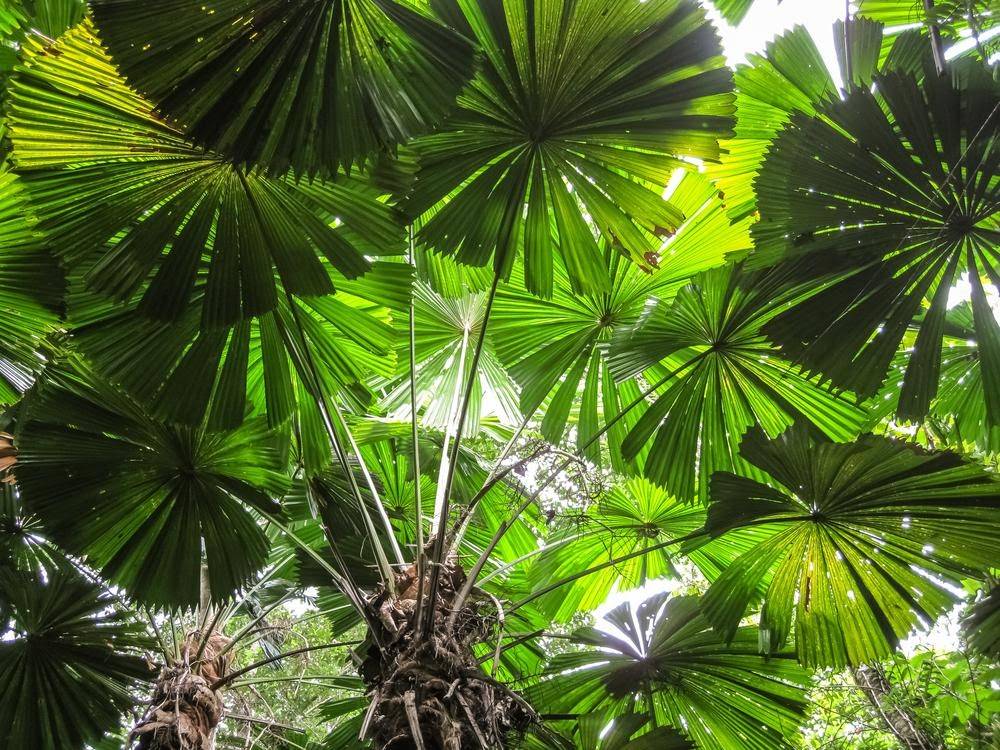 The tropical rainforest canopy is thicker than the one in temperate rainforests. This can be partly attributed to the fact that it rains more often in the Amazon. The high and continuous rainfall provides the trees with more life source to grow.

The canopy here is so thick that it can take the rain around ten minutes until it reaches the ground. Sunlight is mostly blocked too, leaving the rainforest floor in almost permanent darkness.

The Amazon rainforest canopy is around 100 feet in height. For comparison, the Indonesia rainforest canopy is only about half of that. This thickness greatly affects the soil in the rainforest, since sunlight never actually reaches the bottom layer. The soils in the Amazon are some of the most infertile on the planet, even though immense trees grew from this ground. This is why any tree lost in the Amazon is cause for concern since replanting them will be all the more difficult given the very poor quality of the soil.

Animals in the Canopy

You can find a lot of different animals in the canopy layer of the Amazon Rainforest. The tree branches here capture a lot of the moisture and keep the air humid and warm, which for a lot of humans does not make for a very pleasant environment. Still, some animals have actually adapted to live in this part of the rainforest and rarely leave the homes they created in the branches.

Around 50%-90% of the animals in the rainforest live in the canopy. Nobody knows the exact number for sure how many because the canopy is extremely difficult to study. Some trees in the Amazon can even reach 200 feet, making them difficult to climb. And since the canopy is dense, the satellite view only prints part of the picture.

The rainforest canopy is an essential part of this diverse ecosystem. Massive deforestation rates and the fires from 2019 have unfortunately threatened the safety of the Amazon Rainforest and all the animals in the canopy layer. If you want to help restore their homes, you can. Plant a tree today!