The Effects of a Forest Fire

There were around 50,477 forest fires on U.S. soil in 2019/according to the National Interagency Fire Center, with an estimated 4,664,364 acres of land burned. But although the media is quick to report on these events, most people don’t realize the full effects of a forest fire.

The impact of a forest fire goes beyond burned land. It also affects the communities and local economies. The scale of the fire, as well as the area where it takes place, can lead to various outcomes. You’d be surprised to hear that not all of them are negative.

The Effects of Fire on Forest Fauna

Forest fires’ effects on animals can be extensive. They can sometimes disrupt the activity of native animals either by forcing them to abandon their habitat or by injuring them and making them more vulnerable to predators. In most cases, especially during a small-scale fire, the animals will not be extremely affected as they can migrate to surrounding areas that have been left untouched by flames. Over time, these creatures can even return to the burned land and help restore it.

Some animals can travel to safety while others, such as insects or reptiles, can hide underground and escape the flames. Birds or animals that live in trees can also easily escape fire intensity and get to safety. If the fire is on a small-scale, the fauna is usually equipped to handle it and remain safe.

But this is the best-case scenario. In some instances, the fires may be too big for these creatures to escape in time. Ecologists from the University of Sydney estimated that half a billion animals have been affected by the recent Australian fires, with almost 30% of the koala population from the New South Wales area having perished as a result.

The biggest issue concerning the effects of forest fires on wildlife has to do with endangered species, which are usually located in roughly the same areas. A number of these animals can lower tremendously because of a forest fire. Survival of the entire species can be threatened when forest fires spiral out of control.

WWF warned that the Amazon fires that raged through the area in 2019 put hundreds of endangered species of plants and animals at risk, including the giant anteater and the giant armadillo. The massive extent of these fires, unfortunately, put countless animals at high risk. Some of the dangers may even be irreparable.

Forests are natural homes for many animals, birds, insects, and other creatures. Human activity is unfortunately already interfering with the life of many animals, especially because of deforestation activities that leave these creatures without homes. When a wildfire destroys what’s left of the forest, the survival of many species becomes a great concern.

Dead Wood and Changes to the Land 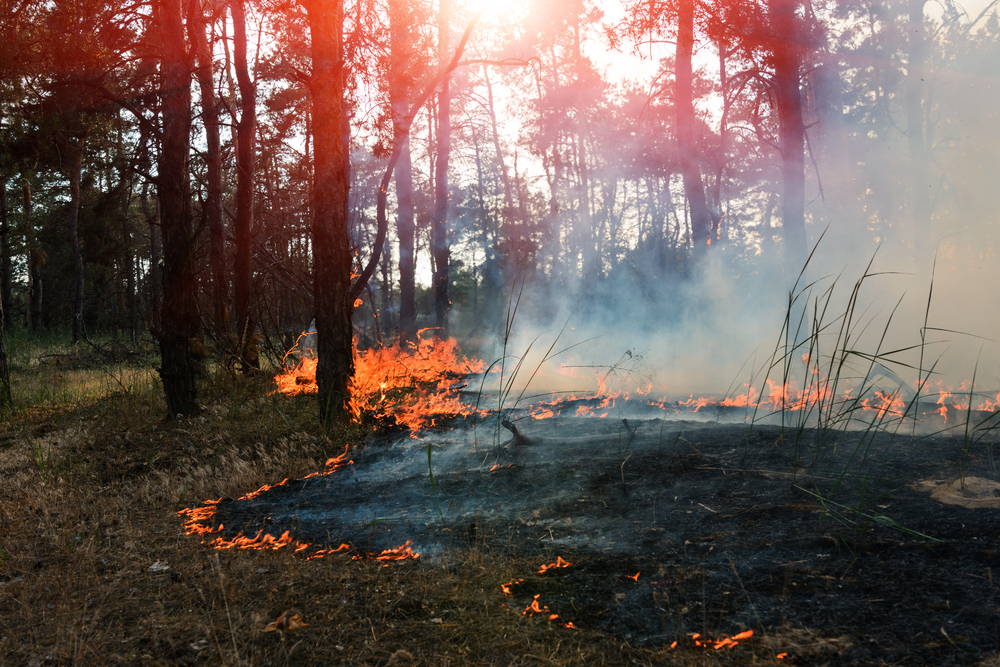 Forest fires can sometimes create long-term changes to the land, especially when you think about the soil. When trees catch on fire and hit the ground, they burn for a long time right on top of the soil. The heat radiates both upwards and downwards.

The heat that goes into the soil can harm microbes and completely change the quality of the soil. In one study led by botanist Jane Smith, it was discovered that red soils affected by fires have fewer nutrients in them even four years after the forest fire took place. These findings raise a lot of concerns regarding soil productivity in areas prone to wildfires.

Even if the soil can heal over time, if there are no trees left standing, then the soil is not getting enough nutrients. While it's true that trees get their own source of nutrients from the ground, they can also feed the soil through leaves or branches that fall off. As these elements decompose, essential nutrients are put right back into the soil, nurturing the land and making the vegetation there able to feed and grow.

However, there are also some positive effects of forest fires pertaining to the quality of the land. Fires are essential to helping forests get rid of excessive deadwood and making sure the rest of the area thrives. Wildfires that are created by nature are essential to ensuring the natural health of the forest, as they can get rid of "debris" that intervenes with the natural flow of the ecosystem.

The problem is that massive forest fires like the ones seen in the Amazon burn a lot more than just dead wood or other debris. Given the scale of the 2019 fires, lost biodiversity is unfortunately only part of the damage and one that can be easily noticed. The amount of heat that went into the soil here could have potentially harmed the soil so much that restoring the rainforest can be a lot more difficult than restoring other areas.

The Amazon was already dealing with some of the poorest soils in terms of nutrients in the world. The forest was essentially feeding itself and left little to no nutrients for the soil. Even leaves or branches that may give some back to the ground are quickly eaten up by bacteria and fungi thanks to the warm and humid climate. The soil, however, remains unfed.

The Amazon rainforest is unique in this sense. But, its uniqueness may pose a threat to its survival now that the fires have created such massive damage. The trees that are lost must be replaced to ensure the ecosystem in the rainforest isn’t affected forever. The soil's infertility inevitably makes this task a lot more difficult.

Impacts of Human-Induced or Severe Natural Wildfire on Plant Diversity

It’s not necessarily a question of whether forest fires have positive effects on a land or if it brings only destruction. It’s more a question of the effects of human-induced fires versus natural wildfires.

Most of the extensive wildfires that have recently made the news have occurred at least in part because of human activity. The Amazon fires in 2019 were mostly human-induced. Poor government oversight over land clearing activities through fires have added to the massive scale of the wildfires.

Wildfires can also be completely natural and caused by:

When they occur naturally, meaning they were not induced by humans, the effects of a forest fire can be quite beneficial:

It’s not to say all human-induced forest fire effects on the environment are bad. Controlled burning is sometimes needed to help maintain forest health, as the fires will burn through dead grass, fallen tree branches, dead trees, and thick undergrowth. Because the flames are controlled, the healthy vegetation remains unaffected.

Controlled fires can also help prevent the spread of a destructive wildfire. If all that’s left is healthy, thriving vegetation, then the flames may not affect the forest at such a big level.

Most of the bad things about forest fires are connected to high-impact flames that travel at elevated speeds, which usually manage to kill virtually everything in their way. The size of the flames in question are usually influenced by:

Forest fires, by themselves, aren’t necessarily something you should be concerned about. If they are natural or controlled, they can help the forest, not destroy it. But when you factor in all the variations presented above, forest fires can do more harm than good.

The Australian fires are a good example of how naturally-induced bushfires can become all the more destructive because of human activity. The fires themselves are known to have been accentuated by a hot dry spell that swept the country. This dry spell, however, isn’t necessarily natural. It’s one of the effects rising temperatures have, and Australia has been getting hotter and hotter each year.

If the temperatures continue to rise because of elevated CO2 emissions, it’s likely the fires will get worse, and so will the effects of wildfires on the environment. It’s difficult to estimate how exactly the fire pattern will change because as the world becomes warmer, these events will be harder to predict.

How Bad Is the Climate Feedback from Fires?

Wildfires that are massive and destructive are at least partially due to changes in the climate that is making the air warmer and the vegetation drier. When the trees, grass, or shrubs are dry, they can easily catch fire. The flames can bounce from one tree to the next and shatter the biodiversity.

But that’s just one side of the coin. Wildfires also influence climate because of the amounts of CO2 they release into the atmosphere. Around 8 billion tons of carbon monoxide has been sent into the air every year due to wildfires.

This amount adds to the already concerning carbon emissions that exist all over the world. There were 36.81bn tons of CO2 released in the atmosphere in 2019 alone. According to Climate.gov, the last time the CO2 levels were this high was more than 3 million years ago.

By themselves, wildfires may not cause a lot of damage to the climate. They have been happening for millions of years and are considered as part of the planet’s natural carbon cycle.

The problem is, they don’t exist by themselves. We should also factor in massive human activity that is known to produce high levels of CO2. Add to this the carbon emissions of wildfires that seem to be happening more frequently and at higher scales, and the planet may reach its tipping point sooner than expected.

The bigger the fire is, the more CO2 is released back into the atmosphere. The 2017 fires in California reportedly released as much CO2 in one week as all the traffic in the state would have in an entire year.

Raising CO2 levels in the atmosphere leads to significant changes in the climate. As the weather becomes warmer and warmer, the prevalence of forest fires can increase as well. Not only that, but the fires may become bigger, and more destructive.

The solution to lowering the risk of wildfires, as well as preventing the climate from becoming warmer may be to plant more trees.

Planting healthy trees in areas that have either suffered from deforestation, droughts, or wildfires can help restore the biodiversity in the land. Trees don’t just take nutrients from the soil - they can also return it. As leaves or branches fall on the ground and decompose, all those nutrients go back into the soil and replenish it, making the entire area thrive. When a forest thrives, it is less likely for a wildfire to start and spread.

Healthy trees also actively contribute to diminishing the effects of climate change. Trees are natural filters that take out the CO2 from our atmosphere and help keep temperatures from rising. Some experts estimate that filling an area the size of the US with trees could help reduce even two-thirds of all carbon emissions from human activities. It would be a massive, global program, but experts believe that it’s also the most cost-effective solution.

You can contribute to it as well by taking action and planting more trees to restore the health of forests or lands affected by wildfires and deforestation. More and more research shows that planting more trees is one of the best ways you can literally save the planet. So plant a tree today!