Wildfires aren’t a new phenomenon. They can occur in dry and warm climates and play a crucial role in shaping the vegetation. But, that's just one small part of the story.

The risk of severe wildfires is increasing significantly in different parts of the world. Massive bushfires have been raging in Australia for months. Wildfires have devastated about 7,000 square miles of the Amazonian forest. Data from the National Interagency Fire Center shows an increase in the occurrence of wildfires in the US since the 1980s.

Looking at these trends, one can't help but ask themselves: what is happening? Does climate change increase the risk of wildfire? If so, what can we do about it?

Before we can answer these questions, it's important to understand the causes of wildfires.

What's the Leading Cause of Wildfires in the US? Humans!

Wildfires have two main causes: they can be completely natural, or they can be human-made. Most people believe that dry vegetation and drought is what causes a wildfire. Statistics, however, paint a different story.

Around 85% of wildfires in the U.S. are caused by humans. Some of these fires are intentional arson while others can be classified as negligence:

These flames can cause extensive damage. They can burn millions of acres of land at rapid speeds, leaving few things standing in their way. Wildfires can destroy trees, land, homes, and even kill animals or humans in their way. According to National Geographic, wildfires can travel up to 14 miles per hour, which means they can "outrun" the average person in minutes.

Fires will not only burn everything to the ground, but they can also cripple the economy. The Camp Fire in California, for example, burned 153,336 acres, destroyed 18,733 buildings, killed 85 people, and cost $16.5 billion in damage.

What Caused the Wildfires in Australia? 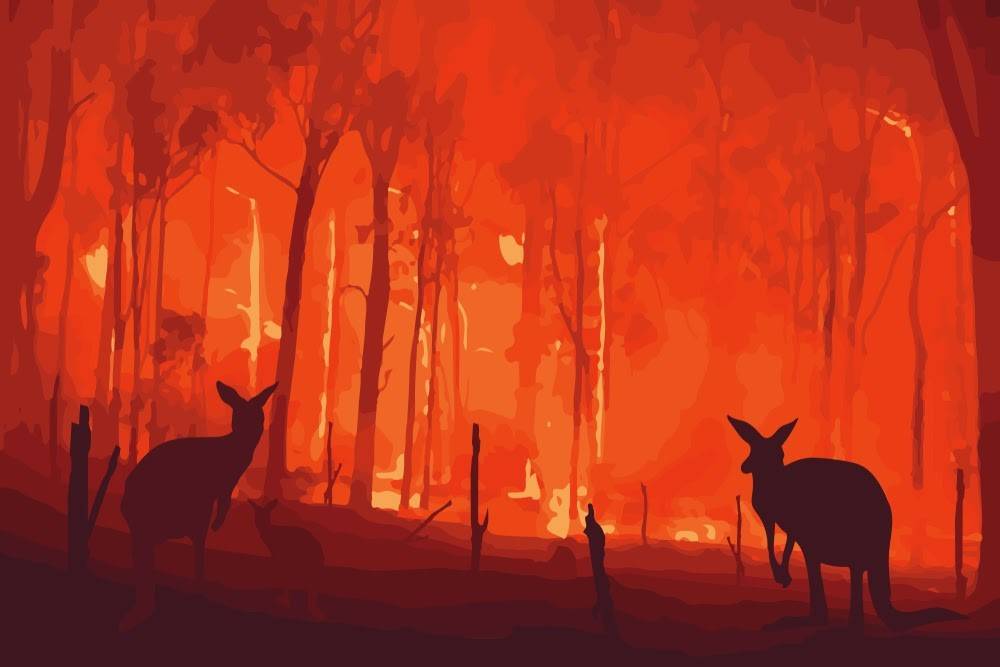 Australia is no stranger to wildfires, but this season has been particularly devastating. 46 million acres have burned since September and hundreds of fires are still burning, especially in the southeast of the country.

What caused this hellish wildfire season in Australia?

The fires started in different ways. Some occurred naturally due to hot and dry conditions. Some were started by human activity, including arson. But, experts agree that climate change is mainly to blame for this year's unprecedented fire season. 2019 was Australia's hottest and driest year on record. The temperature was 1.52 degrees Celsius above the average for this period.

The extreme heat wave was accompanied by brisk winds, which provided fuel for the fires to grow and spread.

Wildfires are common in Australia and will continue to be. But, the warming climate will change how often wildfires occur and their intensity. Hotter and drier conditions mean that we can expect to see longer and more destructive forest fires in the following years.

If you want to learn why do wildfires happen, then you need to understand the role the weather plays. Temperature, wind, and moisture are the three main ingredients that can affect forest fires. Hot temperatures dry the vegetation, making it flammable and easy to ignite. Low levels of humidity make the wildfires more likely to occur. The wind supplies the fire with additional oxygen, allowing it to grow and spread.

If you were to ask where do wildfires occur, the answer would be almost anywhere on the globe as long as the proper conditions are met. There are certain periods throughout the year that make the environment more prone to catching fires. For example, the "fire season" in California is usually during fall when the Diablo winds from the North and the Santa Ana winds from the South blow across the land that has been dried up during the summer heat. These winds make the vegetation here extremely flammable and can even promote larger flames.

What Causes a Fire?

Every single object on Earth has a temperature point. When this point is reached, then the object bursts into flames. This point is also known as the "flash point."

The flash point for wood is 572 degrees Fahrenheit. When a tree’s trunk is heated to this temperature, it starts releasing hydrocarbon gases. Mixed with the oxygen in the air, these gases start to combust and create the fire.

Three elements go into creating combustion: fuel to burn, air to give oxygen, and a heat source that brings the fuel to ignition temperature. Once you have all these three elements, it’s really easy for a wildfire to spark and spread.

How it ultimately spreads depends on several factors, such as:

So if there is a lot of fuel to spare, the weather is dry, and all the natural elements of an area are placed closely next to each other, a small fire can quickly escalate and scorch vast areas.

Does Climate Change Play into It?

The vast majority of wildfires are made by human activity (or, to be specific, human mistakes.) This doesn’t mean that the climate has no say whatsoever in the increasing prevalence of these phenomena.

Climate change has been a key factor in raising the risk of wildfires, especially the ones that wreak havoc over large areas. The rise in temperatures, which is one of the biggest effects of climate change, is making the vegetation in certain areas to become extremely flammable.

As the temperatures rise, the fuels (trees, grass, etc.) become dry and flammable. Data shows that climate change has nearly doubled the number of large fires in the U.S. from 1984 to 2015. Extreme heatwaves and droughts have added to the natural causes of wildfires, increasing their occurrence. You can notice these trends on a global scale too.

Shifts in climate can also have a lot to say about how big these fires get and how much damage they can produce. For example, if the weather is dry, then the wildfires can burn through large areas virtually uninterrupted. Any rain that could have potentially put out at least part of the flames is unlikely to occur if there is little to no moisture.

Can You Prevent Wildfires?

Now that we've learned the causes of wildfires and how forest fires happen, it's crucial to also talk about the steps we can take to prevent them. Or, at least what measures we can take to minimize their damage.

Let's begin with the human factor as it's been shown to be the primary cause of wildfires. It’s essential to strengthen education and reinforce harsher punishments when human activity directly causes a wildfire. Some areas that need addressing include:

It's important to tackle this issue from an environmental standpoint too. If wildfire prevalence grows as a result of rising temperatures, onset by climate change, then there needs to be a more effective approach towards replenishing vegetation and combat dryness.

Some methods of achieving this can include:

The world’s carbon footprint is directly responsible for rising temperatures worldwide. According to Climate.gov, 2019 was the second-warmest year on record. Predictions estimate that 2020 is set to be 0.9 °F warmer as well.

The increasing rise in temperatures will only make the vegetation dryer, and therefore more likely to catch on fire even if the source of the flame is minor. By working to combat rising temperatures, it’s possible to prevent further vegetation damage.

Massive deforestation has also been a key factor in the rising prevalence of wildfires. When trees are removed from their natural areas at a fast rate, the entire ecological system suffers.

Clouds require moisture to form and then release rain back into the soil. Trees and healthy vegetation release a lot of moisture into the atmosphere. That leads to cloud formation. But when the trees are almost completely removed from a specific area, clouds no longer form at the rate they used to. One potential consequence of this could be a higher prevalence of droughts, which can affect any remaining vegetation.

Forests, fields, or other areas with a lot of vegetation, even if belonging to the public domain, should still be catered for. If human activity intervenes with the natural flow of these systems, then it makes sense for human activity to be needed to restore the health of some of these lands.

If you want to help diminish the prevalence of wildfires, you can. Planting trees is often the best tool you have at your disposal right now to help highly-damaged areas recover and prevent wildfires from spreading in the future.